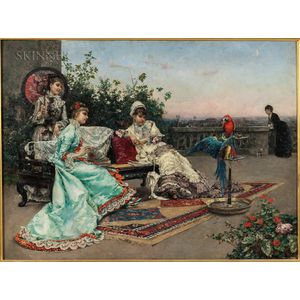 N.B. Though born in Philadelphia, Julius Stewart moved to Paris with his family at age ten and spent the rest of his life as a resident of the French capital. His father, William Hood Stewart (1820-1892), was a wealthy businessman who amassed one of the most important contemporary art collections of the nineteenth century. William Stewart had ample connections to assure his son's access to the ateliers of the city's most respected artists. Stewart first studied painting with Eduardo Zamacois y Zabala, and later entered the studios of Jean-Léon Gérôme and Raimundo de Madrazo.

In 1874, Stewart accompanied Gérôme on a trip to Egypt. This first-hand introduction to Gérôme's interest in Orientalist themes clearly influenced the details of Stewart's composition here, including the carpet beneath the seated figures and the Asian parasol and fan. However, Stewart's brushstrokes are far more painterly than Gérôme's, as can be seen by comparing the carpet in this work to those in Gérôme's Evening Prayer (see Lot 266).

Several of the objects in this work were standard props Stewart kept in his well-appointed studio at 13, rue Billault. The carpet appears in In the Artist's Studio of 1875 (private collection), and the brightly-plumed parrots may have been Stewart's pets, as one appears in another work from 1875, Lady with a Parrot (private collection).

Stewart's debut at the Paris Salon, a year after completing this work, earned praise from French critics. Collectors and critics alike admired Stewart's skilled, academic renderings of fashionably dressed figures at leisure. Stewart applied the delicate, meticulous attention to detail he learned from Zamacois y Zabala, Gérôme, and Madrazo to contemporary subjects, often his wealthy and well-connected family and friends. Though Stewart's subject matter coincided with that of his fellow expatriate, John Singer Sargent, his painting style reflected his affinity for the academic manner of his teachers.
Estimate $150,000-250,000

The areas of possible retouch lie at center, in the area between the two seated female figures, and at center right, in the dress and the area to the left of the female figure standing at the railing. There are possible small abrasions to the upper center, and frame abrasions and gilt transfer to the upper and lower edges and near the lower right corner. Two small holes lie near the lower edge at center.