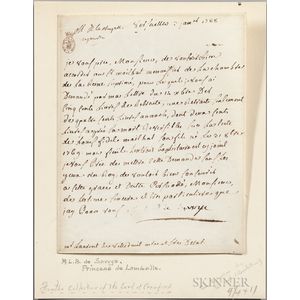 Marie Thérèse Louise of Savoy, Princesse de Lamballe (1749-1792) Letter Signed, Versailles, 3 January 1788. Quarto-format bifolium inscribed over one page to Pierre-Charles Laurent de Villedeuil (1742-1828), Controller-General of Finances under Louis XVI of France, requesting a retirement for Francois Mailhat, carpenter of the Queen's chamber, to be transferred to Mailhat's son Louis-Fidele (born 31 October 1769), on his father's death, and asking that the request be set before King Louis XVI (1754-1793), old folds, dusty, the signature poorly inked for the Princess's initials, hinged onto an old mount, 8 x 6 1/4 in.
The Princesse de Lamballe was a close personal friend of Marie Antoinette, and Superintendent of the Queen's Household. She was imprisoned for her connections to the royal family during the French Revolution, refused to swear an oath of hatred to the King and Queen, and then summarily released to a murderous mob for execution. She was struck on the head, stabbed, decapitated, and her head was carried through the streets of Paris on a pike.
Estimate $300-400