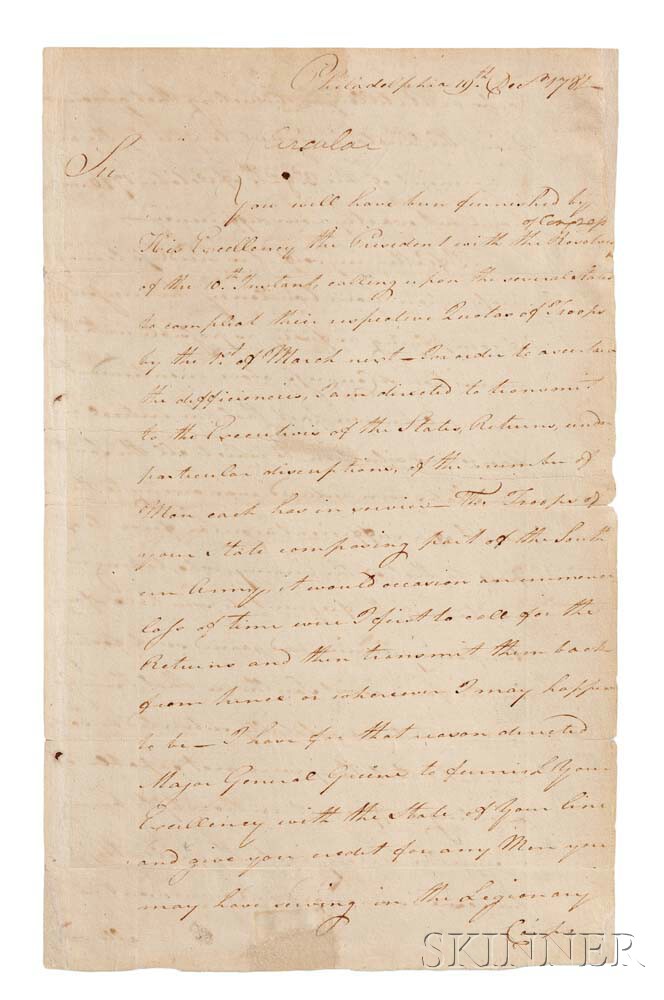 Washington, George (1732-1799) Circular Letter Signed, Philadelphia, 19 December 1781. Two folio sheets of laid paper, inscribed over four pages, to Virginia Governor Benjamin Harrison V (1726-1791), in the hand of Tench Tilghman (1744-1786); titled, "Circular" in Washington's hand and with the addition of two words in line two: "of Congress," old folds, minor strengthening repairs, 13 x 8 in. Addressed to the Governor of Virginia, Washington sent letters with similar content to the governors of Delaware, Maryland, North and South Carolina, and Georgia at the same time, urging an increase in the draft.
"Sir, You will have been furnished by His Excellency the President with the Resolution [of Congress] of the 10th Instant, calling upon the several States to compleat their respective Quotas of Troops by the 1st of March next--- In order to ascertain the difficiencies, I am directed to transmit to the Executives of the States, Returns, under particular discriptions, of the number of Men each has in service-- The Troops of your State compasing part of the Southern Arm, it would occasion an immense loss of time were I first to call for the Returns and then transmit them back from hence or wherever I may happen to be-- I have for that reason directed Major General Greene to furnish Your Excellency with the State of your line and give you credit for any Men you may have serving in the Legionary Corps or Artillery-- deducting that amount from the Quota assigned to you by the arrangement of the 3d. and 21st. of October 1780 will point out exactly your defficiency.
If I flatter myself it is needless to impress upon Your Excellency the necessity of complying as fully as possible with the requisition of Congress above mentioned-- It is a well known fact that the critical and dangerous situation to which all the Southern States were reduced was owing to the want of a sufficient regular force to oppose to that of the Enemy, who, taking advantage of the frequent dissolutions of our temporary Armies, had gained such footing in the four most Southern, that their Governments were totally subverted or so debilitated, that they were not capable of executing sufficient authority to being a regular Army into the field-- Happily the scene is changed, and a moment is allowed us to rectify our past errors, and, if rightly improved, to put ourselves in such a situation, that we need not be apprehensive of the force Great Britain has remaining upon the Continent, or which She can probably hereafter bring. But the greatest encouragement to a vigorous preparation is, that it will be the most likely method of gaining more Allies and forcing Great Britain into a negotiation, which we have every reason to suppose would end in a peace honorable to the interests and views of America.
I will take the liberty of recommending a matter to Your Excellency which I must sollicit you to urge to the Legislature, as absolutely necessary to the filling your Regiments with proper Men, more especially if the mode of drafting should be adopted-- It is, stationing Continental Officers of the Rank of Field Officers at least, at the different places of rendezvous who shall judge of the Ability of the Recruit and pass Him or reject Him as circumstances may require, For want of regulation of this kind We have had hundreds of old Men, mere Children, disordered and decrepid persons passed by civil Characters appointed for Muster Masters, and have been under the necessity of discharging them the moment they have joined the Army-- whereby, the State has been put to a vast expense for an useless Man, and the Service has lost a Man for the Campaign, as the districts from whence such have been sent, have scarce ever replaced them. The Secretary of War will address your Excellency upon this subject, which I can assure you is of the utmost importance to the constitution of the Army--
I have the honor to be with the greatest respect Sir your Excellency's Most Ob St, Go: Washington"
Provenance: The Estate of David Spinney.
Estimate $15,000-20,000

Washington, George (1732-1799) Washington Receiving a Salute on the Field of Trenton.