The English Pilot. Describing the West India Navigation from Hudsons Bay to the River Amazones. Particularly Delineating the Coasts, C 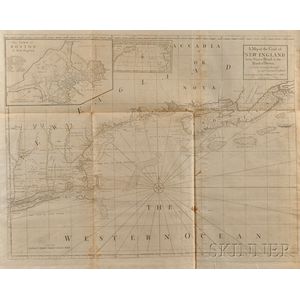 The English Pilot. Describing the West India Navigation from Hudson's Bay to the River Amazones. Particularly Delineating the Coasts, Capes, Headlands, Rivers, Bays, Roads, Havens, Harbours, Streights, Rocks, Sands, Shoals, Banks, Depths of Water, and Anchorage, with all the Islands therein; as Jamaica, Cuba, Hispaniola, Barbadoes, Antigua, Bermudas, Porto Rico, and the rest of the Caribbee and Bahama Islands. Also a New Description of Newfoundland, New England, New York, East and West New Jersey, Dellawar Bay, Virginia, Maryland, Carolina, &c. London: Printed for Mount and Davidson, on Tower Hill, 1794.
Folio, 66 pages of typographical text, and a total of twenty-five maps, twenty-one on separate sheets, all but one folding, and five full-page engraved maps printed on text pages. Lacking map eleven, of Virginia, Maryland, Pennsylvania, and East and West New Jersey. Contemporary sheepskin on the front board, back board missing, last two signatures with some stains, water stains, some maps with minor tears.
The following maps are included: A New and Correct Chart of the Western and Southern Oceans; North America from Newfoundland to Hudson's Bay; the West Indies; the Atlantic Ocean with Europe and Africa to the west and east to North and South America and the West Indies; Casco Bay; Newfoundland; the Southeast coast of Newfoundland; New England; another of New England with an inset map of Boston; New York Harbor; Virginia; St. Christopher's; Barbados; South Carolina and Georgia; Antigua; the Caribbean islands; Hispaniola; Puerto Rico and Zachee (one folding edge damaged with loss); Cuba; Cuba's Bay of Matanzas; Jamaica; Guiana with the mouths of the Oronoco and Amazon rivers; and the Trading Part of the West Indies; in addition to numerous smaller woodcut maps and sketches of coastal features, and one woodcut of swimming penguins: Note, these fowls never fly, for their wings are very short, and most like the fins of fish, having nothing upon them but a sort of down and short feathers.
An extraordinary collection of maps and piloting instructions for 18th century navigation in the Atlantic, The English Pilot went through six editions between 1755 and 1794, all are rare. Only one copy exists of the first, second, and third editions, two copies of the fourth edition are known, three copies of the fifth edition, and five copies of this particular edition.
Estimate $10,000-12,000