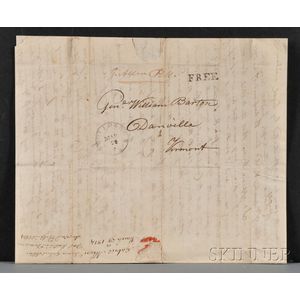 Barton, William (1748-1831) Military Archive, War of 1812:
Five manuscript letters and documents associated with Barton.
Barton's appointment to colonel, dated 1785, signed by Joseph Carleton (1754-1812), Secretary of War; Barton took Prescott in 1777, during the American Revolution, and was promoted for his valor on that occasion.
Together with: three letters addressed to Barton from Gabriel Allen, written in 1813, 1814, and 1816; Allen served under Barton in the American Revolution; during this period, Barton was imprisoned in Danville, Vermont, for refusal to pay a fine. These letters from Allen concern themselves mainly with the War of 1812, with much ink given to the political underpinnings of the conflict; thoughts on treachery, contrasting Arthur Potter with Benedict Arnold, and reminiscences of the American Revolution.
Together with: a letter addressed to William's son John Barton, from his brother Henry. Henry wrote aboard the brig Troup, at Savannah, Georgia. The Troup, formerly a British packet ship called the Princess Amelia, was captured by the American Navy in September, 1812. It was commanded by Captain Walpole, and Barton had just been promoted to Master at Arms.