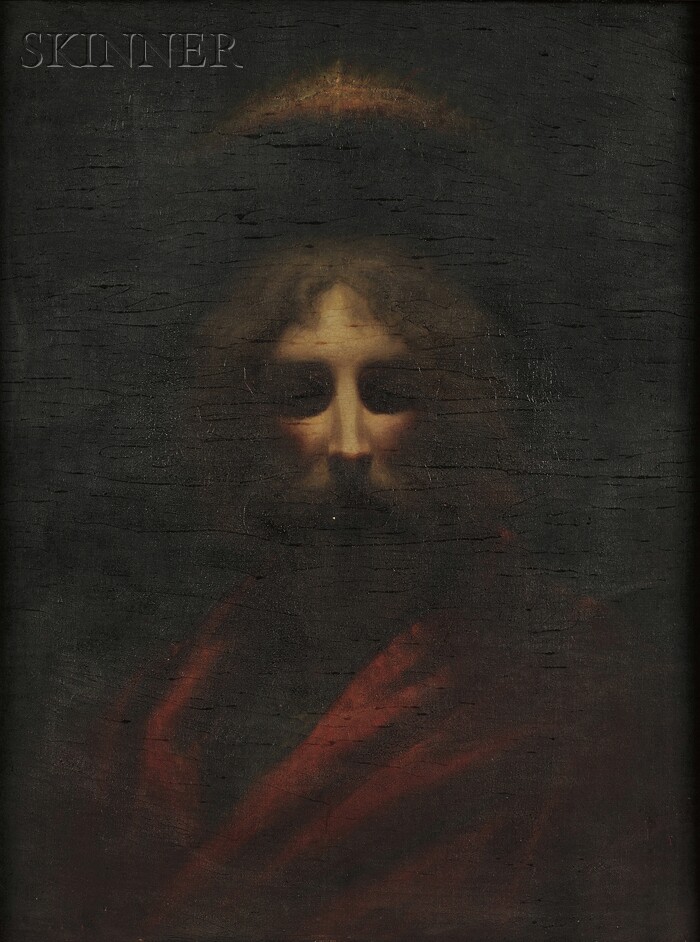 Provenance: Acquired from the artist in November, 1900, by W.P. Toler, New York City; returned to the artist for touch-up; upon Nast's death in 1902 the painting was retained by his widow, Sarah; rights transferred by Toler to Harmon De Pau, Nutting, New Jersey, in 1904; sold to J.P. Morgan in 1908; donated to the Metropolitan Museum of Art in 1910, where it was given the object number 10.208; returned by The Metropolitan Museum to the Morgan family in 1928, then donated to the Cooper Union Museum that same year; sold at auction in 1946 to Meredith Galleries, New York City, with a group of other items from the Cooper Union Museum; sold by Meredith Galleries, then whereabouts unknown; purchased in 1961 in Detroit by the current owner.

Painting is heavily varnished and reveals nothing under black light. Paint loss in center is very small, perhaps 1/16 in. The varnish surface appears striated in raking light.

N.B. The painting at hand, a deeply mystical rendering of the head of Christ executed late in the artist's life, seems an unexpected subject for Thomas Nast, the renowned and influential political cartoonist. However, there exists at least one other related religious work by Nast, a charcoal drawing entitled He Who Practices His Teaching (1895), in the collection of the Macculloch Hall Historical Museum in Morristown, New Jersey.

Nast is best known as a political cartoonist whose works were a regular feature in Harper's Weekly. He joined Harper's as a war correspondent during the American Civil War and continued to work for the magazine until 1886. As the Macculloch Museum biography describes it, during this era "Nast created hundreds of cartoons including those of national symbols forever linked to his genius - the Democratic Donkey, Republican Elephant, Uncle Sam, Columbia, Tammany Tiger and Santa Claus." (1) The power of Nast's drawings, based on his fiercely held political beliefs, was never to be underestimated. Ulysses S. Grant attributed his election as President in 1868 "to the sword of Sheridan and the pencil of Nast." And it is said that in that same year, corrupt New York City official "Boss" Tweed, the object of many of Nast's most pointed cartoons, dispatched his minions with the command, "Stop them damn pictures. I don't care what the papers write about me. My constituents can't read. But, damn it, they can see the pictures." (2)

At the end of his life Nast suffered financial setbacks brought on by disagreements with Harper's, some ill-advised investments, and the changing demands of American publishing and changing tastes of the American public. He wanted also to return to history painting and received a few commissions from friends. In 1902, in need of work, Nast accepted Theodore Roosevelt's offer of a position as American Consul in Guayaquil, Ecuador, where he died of yellow fever six months later.