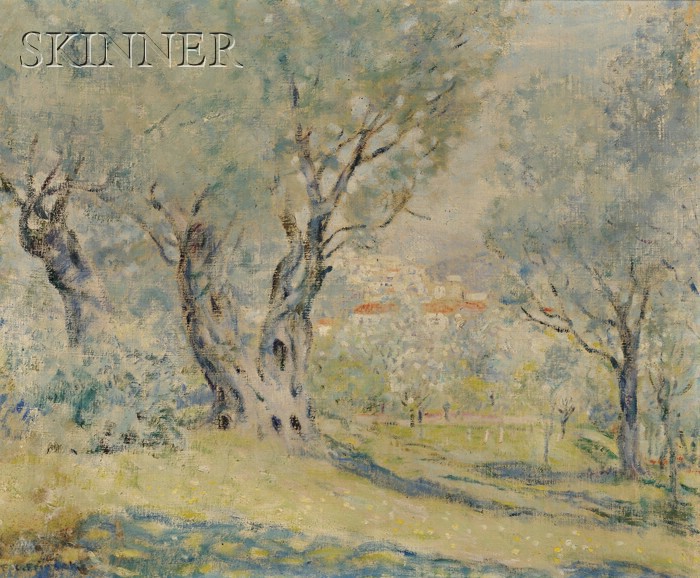 N.B. Frederick Carl Frieseke is regarded as one of the leading American Impressionists. Born in Michigan, Frieseke began his studies at the Art Institute of Chicago and at the Art Students' League in New York, before heading to France in 1897 where he would live for the rest of his life. He studied in Paris at the Academie Julian under Jean-Joseph Benjamin-Constant and Jean-Paul Lauren. He was influenced in his early work by J.A.M. Whistler, with whom he may have studied briefly, and also by the works of Monet and, more especially, Renoir. Frieseke rented a house in Giverny in 1906, and for the next 14 years he spent summers painting there with other expatriate artists drawn to the area by Monet. Following World War I, Frieseke left Giverny, settling instead in Normandy. Shifting away from Impressionism toward realism, Frieseke's later paintings tend to have quieter palettes and contemplative moods.

Frieseke received many prizes for his work, including a gold medal in Munich (1904), and both gold medals and a popular prize for his painting Torn Lingerie from the Chicago Art Institute (1920).

The painting at hand will be included in The Frederick Carl Frieseke Catalogue Raisonné, being prepared by Nicholas Kilmer with the support of the Hollis Taggart Galleries. A letter to this effect from Mr. Kilmer accompanies the lot. The painting will be dated "by 1920." The landscape setting is Cagnes-sur-Mer along the Mediterranean coast of France near Nice.

Staining to the reverse. Painting is held in its frame with nails through the stretcher.